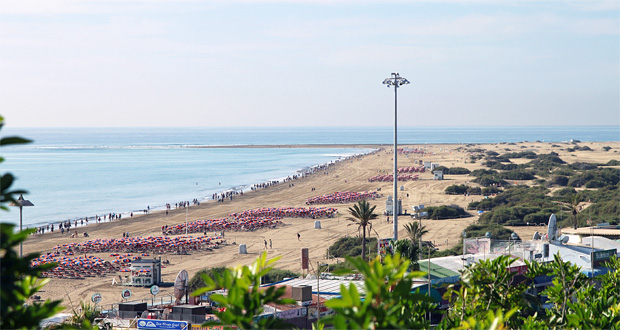 Topless sunbathing is quite normal on Gran Canaria’s beaches among both tourists and locals.

Nudism is restricted to nudist beaches, but is also tolerated on several remote and undeveloped beaches around the island.

The dunes of Maspalomas
The best known nudist beach in Gran Canaria is situated between the resorts of Maspalomas and Playa del Inglés.

To find the official nudist section, simply walk from either end of the beach towards the middle. The nudism area extends from the dunes to the sea.

Montaña de Arena
If you prefer a more discreet nudist beach experience, head for the beach Montaña de Arena between Maspalomas and Arguineguin. The beach is a thin strip of sand at the base of a huge sand dune. The beach is reached after a 10 minutes walk down a track from the road GC 500. No beach services.

Playa El Confital (Las Palmas)
Las Palmas has its own nudist beach, Playa El Confital, at the very north end of the city. The beach is mostly rocky, but has a few patches of golden sand. Larges waves are quite normal, which makes the beach very popular among surfers. Facilities include showers and toilets. The nudist section starts at the end of the wooden boardwalk.

It has several lovely fish restaurants and is the departure point for the fast ferry to Tenerife. Puerto de las Nieves has two pebbly beaches and one of them has a designated nudist area.

Guayedra beach
Guayedra is a pebbly and sandy naturist beach about an hour’s walk south of Puerto de las Nieves. It is a stony beach with some sandy areas. If you prefer to reach the Guayedra by car you have to turn off between Agaete and La Aldea de San Nicolas. The beach has no services.

Güigüi beach
Güigüi, or Gui Gui, is perhaps Gran Canarias’s most remote and unspoilt beach. This west coast beach is a combination of boulders and sand, surrounded by stunning mountains. The beach has no services, but a small bar at a rudimentary campsite close to the beach sells the essentials.

Güigüi is best reached by water taxi from Puerto de las Nieves or Puerto de La Aldea. If driving, you have to leave the car in the tiny village of Tasartico. From here it takes at least two hours to walk down a path to the beach.

Playa Veneguera
Playa Veneguera is an unspoilt beach close to Mogán in the south-west of Gran Canaria. The beach is stony but has areas with fine dark sand. Playa Veneguera has no designated nudist area, but nudism is quite normal. No services at the beach.

To reach Playa Venguera take the road Gc 200 from Mogán. Turn left towards San Nicolás and after a few kilometres again turn left towards Veneguera. The last part of the road is usually in rather bad condition.

Beaches close to Arguineguin
When driving the road GC 500 from Maspalomas to Arguineguin there are several undeveloped beaches between Pasito Blanco and Arguineguin. These small beaches are not officially nudist beaches, but nudism is normally accepted. The car must be parked alongside the road.